Not to Panic, we will deliver next week - Lockdown or Not

Story of peanuts being grown organically at a farm in Andhra

Posted By Gautham PB on Thursday 25th February 2021
Many of you love Healthy Buddha's Spicy Peanut or the Crunchy Chikki Bar. Ever taken a moment to wonder how and where the peanuts in them are grown and what it means to grow it organically? 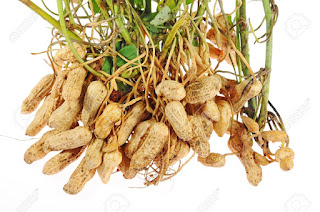 Here is a peek at what it takes to grow groundnuts organically. This specific farm is Located  in a small village in Chittor District (Andhra Pradesh). The Farm is owned by one kumar who works in Bangalore as an IT professional and he manages his farm over weekend and even monitors it using a camera fixed in his farm and via instruction to his farm manager. All the pictures below are real pictures taken at different points of growth.

The sowing usually starts from the commencement of the rains. Groundnut usually takes 4 months before they are ready to be harvested.
Step 1 - Getting the Soil Ready
The land is prepared thoroughly after the receipt of summer showers. This helps in sowing the crop early in the season, well before the onset of the monsoon.
After the onset of rains, the soil is pulverized by providing two ploughings to get a good tilth. The third and final ploughing beds of convenient size are made and sufficient ploughing is done to obtain a good tilth.
The soil often contains a lot of lumps of mud and for seeds to grow properly, the mud needs to be fine to allow circulation of air and water. After the soil has made fine, leveling is done to raise the soil and form beds.

After the beds have been made, then fertilizers are added to the soil. In organic farming , we mainly use Prepared "Ghana Jeevamrutham" mixed with Neem cake granules and apply this mixture to the top soil of our farm. Ghana Jeevamrutham is a mix of ​Desi Cow Dung, Jaggery, Besan in ratio of 100:1:1. This should be in dried form.

The field is then to be irrigated is divided into strips by parallel dikes or border ridges, and each strip is irrigated separately.

The seeds are given for sowing typically after the rainy season where they are stored in their pods and only shelled a few days before planting. The pods are shelled 1–2 weeks before sowing and only the seeds of good quality are selected for sowing.

Water is introduced at one end and progressively covers the entire strip. This facilitates sowing with a seed drill and also prevents the loss of land
The spacing for the seeds is done between  15 and 20 centimeters for bunch and spreading types respectively. Sowing should be done about 5 centimeters deep behind the plough.

The optimum temperate of the soil for growing groundnuts is 30 degrees-celsius.Groundnuts grow well in warm areas, below 1500 M above sea level.After 15 days, the plants start to germintate.The crop requires adequate amounts of Calcium when pods are forming, otherwise the farmer ends up with empty pods. In organic farming, typically lime in used and sometimes egg shells

Leaves first appear in the embryo, no new ones are formed until much later. Flowering in groundnut begins 20 to 30 days after emergence, depending on genotype and environment,especially temperature. 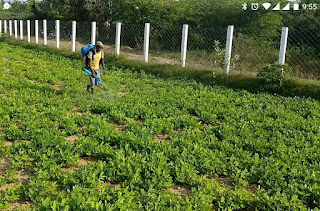 In the picture, we see the farmspraying Panchakavya on the crops to boost their immunity. In organic farming, our pesticides don't kill pests but instead drive them away. In chemical farming it has been seen that pests eventually from a resistance towards pesticides but in organic farming on the other hand, there is nothing the pests need to form a resistance towards. They're only being driven away. 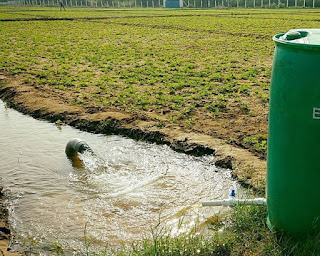 In this picture, we see the mixing of Jeevamrutham in Flood irrigation. Jeevamrutham is a great growth booster and improves microbial growth in the soil. 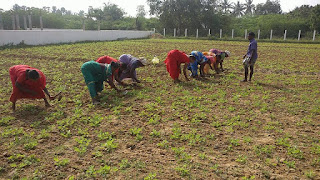 Step 4- Weed Extraction
Weeds cause a lot of damage to the crop After 40 days of growth. The average loss of crops due to weed is about 30%. If you notice, weed extraction is done manually in organic. Whereas in non organic, various chemicals like round up are used to quickly kill the weeds.

Groundnut usually takes 4 months before they are ready to be harvested where they can be taken for shell removing and grading.
&a