Why is Onion So Expensive in October - November Every Year? 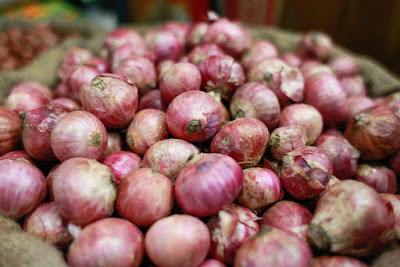 In simple words, there is a heavy short supply of onions at present, resulting in prices shooting up.But, why are the onions in short supply?Heavy unseasonal rainfall has resulted in onion produce getting locked in wet fields throughout onion growing states of Maharashtra, Karnataka and Telangana. In fact, many districts in north Karnataka were recently affected by floods, which damaged onion crops. 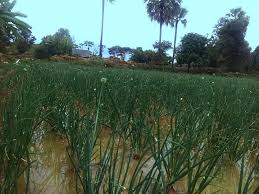 As a result, onion prices increased everywhere in the country.In general onion prices tend to rise during the month of August-September. But cools down in November.To better understand, one needs to know the harvest cycle of onions in the country.Onion Harvest CycleBulk of the onion crop (about 80%) is grown in the winter or rabi season  and sown during the two months of December and January every year.  This crop is ready for harvest during April-May, which is the main harvest that meets most of our annual demand. A chunk of it is also exported.This is the reason in general, prices increase in the month of August and September since the supply starts to shrink and fresh harvest is still awaited.The summer or kharif onion crop is sown during May-June and is reaped during October-November.It is when this harvest reaches markets —that prices will adequately cool.But this year it so happened that many of these crops got damaged due the recent rains.It rained nearly one and a half times more than normal in Maharashtra between October 1 to November 6, Karnataka received double the rainfall compared to last year, and Telangana received 65% more than usual. This unseasonal deluge damaged crops on one third of Maharashtra’s cultivated area. 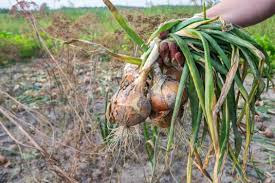 Farmers from the states affected by unseasonal rainfall are not able to harvest their crop from fields submerged under rainwater, shooting average average wholesale prices by 120% within 2 weeks.A relatively smaller, second summer crop, known as late kharif crop, is sown during August-September and harvested in January-February.Only when this supply comes to the market plus some imports gets triggered, prices are expected to fall down.Government is doing its bit by banning exports and increasing imports. Imports don’t work to cool prices promptly unless they have been signed up much in advance. In the long run, it also needs better policy responses, such as creating more refrigerated storage facilities so that surplus onions can be stored longer.Policymakers therefore need to put together a comprehensive picture of supply-side situations by connecting production data and weather forecasts much in advance.Healthy Buddha AngleThe organic farms growing onions are fewer, and hence the supply is even lesser vs the conventional ones. Many of the regular farms we work with have got severely impacted. Onions that are coming in are quite wet and are spoilt on the inside. We are trying our best to get the best quality onions for our customers. We are also eagerly awaiting fresh harvest to start, to help infuse more supply at better quality and much more reasonable price. We expect the prices to decrease post 15-December as new crops gets ready for harvest.Till then, consumers will have to bear the inconsistency in quality as well as high price. Possibly, time to experiment with recipes without much/ no onions in it :-)Gautham PB, Co Founder - Healthy Buddha
You can follow Gautham on Instagram & TwitterHealthyBuddha.in home delivers fresh organic fruits and vegetables in Bangalore and North Goa.