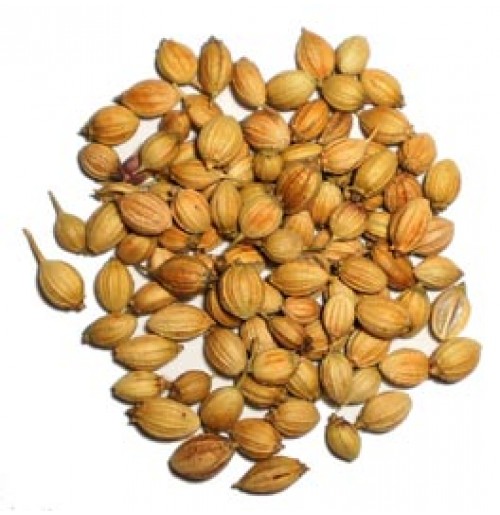 Description: Coriander seeds are plump and brown in colour, have a hollow cavity which bears essential oils that lend to the flavour of the dishes when used in cooking. All parts of this plant are edible, but the fresh leaves and the dried seeds (as a spice) are the parts most traditionally used in cooking.

The seeds have a lemony citrus flavour when crushed, due to terpenes linalool and pinene.

Use: it is a popular spice in the kitchen used for Rasam , Sambar , chutneys , along with other spices in a blend called Garam masala. It is even used as flavour in pickling.

Tip: Roasting or heating the seeds in a dry pan heightens the flavour, aroma, and pungency.

Benefits In Ayurveda, it is often recommended for stomach related ailments, as it is known to ease digestion. It is known for helping manage diabetes. As per Ayurveda, the seeds have potent effect on the way the body digests food and absorbs fat, making it a common recommendation to keep cholesterol levels under control. It has presence of antioxidants and dietary fibre.